Dora had what for us humans would have been a very bad, no good, horrible week. 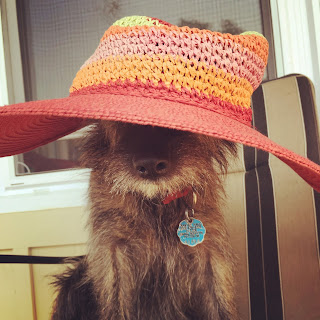 She has always been terrified of the vets (turns out she had her puppy shots there and for whatever reason that became a VERY BIG DEAL in the lizard, primal bit of her brain). My crew has been largely healthy lately and while Dora has come with us to the vets and worked on being comfortable and relaxed a few times my best plans to REALLY WORK on this kept getting pushed to the back burner. A great example of  real life procrastination to use for classes but not very good for Dora or for me. Sigh.

Then disaster. Her hind dew claw was growing strangely and hurting her. Because it hurt her she wouldn’t let me touch it, or soak it, or even look at it pretty quickly. (Yup – you know we’ll go back to the drawing board there too). The last last thing I wanted was to take her to the vets, knock her out, traumatize her and then have to repeat that process regularly. I thought a little, worked on handling a little more (not very successfully) and decided now was as good a time as any for Dora to be spayed. (beyond the dew claw needing attention a friend of mine had a run in with mammary tumours with her girl, I had a nightmare about Dora having a litter of coyote puppies and a rescue I work with had a case of pyometria – any one reason would be enough – four together was PLENTY of cause to pull it together). Anyhow – long way to say I called to book appointment – thinking we’d have time to work on “stuff”. We ended up with 3 days. Whoops. So I kept working on handling and calm, and we went for a lot of walks. A lot. A whole lot of walks. 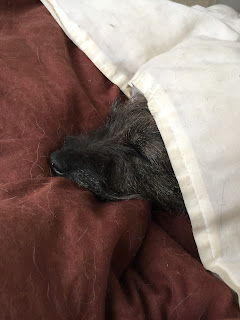 D day hit … and off we went. I declined preoperative blood work knowing full well they wouldn’t get it from her awake and I didn’t want her under an extra 20 minutes. Sigh. We weighed her and off she went. I set myself up in an unobtrusive corner of the waiting room in case they needed me. Not 3 minutes until I got the beckoning finger – “:Can you hold her so we can get her pre- meds on board?” Of course. Then she and I sat and waited for them to kick in. She fought it hard but the drugs prevailed  and off to la la land she went.  I read and surfed the web and quietly waited hoping I wouldn’t be called again … but an hour later “she’s waking up, she’s really thrashing …. can you come hold her?”. I have recovered plenty of post surgery patients and usually it’s about 10-20 minutes before they crash for a solid sleep. Dora fought the return to sleep for a solid 45 minutes. The clinic staff nearly gave up and offered to send us home. Hell no – she’ll get there …  and she did. Poor fierce terror.  She fell asleep and I raced home for a couple of hours of peace.

She was happy to see me when I picked her up – wagging and walking determinedly if a little drunkenly.  My orders were to keep her quiet for 10 days. I laughed. They wrote a prescription for a tranquilizer.

Dora has been gracious and gentle and oh so very sweet. We’ve moved a large crate to my feet – where the multiple beds usually are and she snoozes away in there – even when the door is open. She shares the crate with Yen and Sally if they want. She is missing her walks and whimpers when we head out – but has adapted to being on leash amazingly well for potty breaks. Yesterday we walked around the house yard on leash. Very exciting! 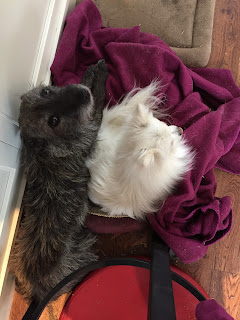 We’ve made a point to take her out in the car to entertain her brain and she’s slowly getting less scruffy and more plucked as we sit and hang out together.

She’s not despairing over the change in her routines, she’s not fretting over the odd ouchy she obviously feels. She’s not even frustrated by being asked not to lick her wound. (I acclimated her to the Elizabethan collar carefully and slowly – when I walked away from her she had it off before I turned around). For a sensitive, feral, hard to handle, somewhat opinionated terror terrier  she’s handled this situation with a grace and aplomb I did not anticipate.

Being afraid does not make the difficult things go away. Fretting and stewing and spinning does not improve the outcome. Planning, and thinking ahead, goal setting and being organized those are the keys to getting ahead. Sometimes  on a very bumpy route it’s true but still essential elements to being successful.  The events of the past week have reminded me of all this. Through the brain of one very good, very gritty, terrier.